My face does get really flushed when I run, but this time I just felt like I was overheating and I didn’t think it was going to get any better. After mile four, I stopped and walked twice and then started again, but realized it wasn’t to be. Thankfully my mother’s house is along the route at about 4.5 miles—I walked there. 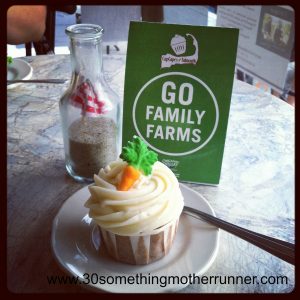 I was pretty upset about pulling out, but when I checked the weather and saw that it was 75 with 92% humidity, I didn’t feel so bad. I had actually seen a Kenyan masters runner who was “jogging” and had seen an elite woman bail at the first mile. A friend later told me that she had seen another Kenyan jogging and one walking! Apparently there were a number of runners who collapsed on the course.

An article on Boston.com had an interesting quote from Frank Shorter (1972 Olympic marathon gold medalist and frequent Falmouth runner): “I couldn’t tell you how many Falmouths I’ve run,’’ Shorter said, “but I can tell you this one was the hardest.’’

I know I did what was best for my body, and I don’t regret my decision. I don’t think I am going to a race again until the fall weather sets in.

I have felt great in the weeks leading up to the race, so I don’t think it was a fitness issue. Maybe I am just not cut out for summer racing!

Now for the good part—I had a wonderful time on the Cape. On Saturday, my friend and I went to get our numbers and check out the expo. I got to hang out with the ZOOMA ladies (Brae and Brooke) at their expo booth. I also got to chat with Bart Yasso at the Runner’s World Half Marathon booth. 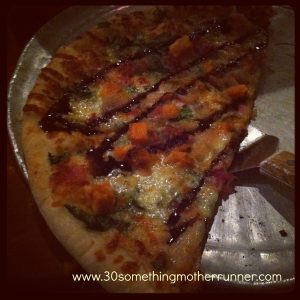 After the expo we embarked on a mini culinary tour of Falmouth, hitting Cape Cod Bagel for lunch before driving the Falmouth Road Race course. We then did some shopping—I found some great birthday gifts in the clearance section at Caline for Kids. After working up an appetite shopping, we stopped at CupCapes for some delicious cupcakes! CupCapes makes organic cupcakes that are pure awesomeness. They had Thin Mint, Red Velvet, Rocky Road, Hot Fudge Sundae and more!

For dinner we went to my favorite pizza joint in Falmouth Stone L’Oven. It’s a great place to get a craft beer on tap and some excellent pizza. I got one of their featured pizzas (breaking away from my almost 100% veggie diet!).

The pizza had roasted sweet potatoes, caramelized onions, baby spinach and gorgonzola cheese over a creamy pine nut and garlic spread. The toppings also included apple-wood smoked bacon, olive oil and aged balsamic vinegar. It was such a different combination and SO GOOD!

So the weekend may not have been the best on the racing front, but it was definitely a culinary success!

Who else raced Falmouth? What was your experience?

0 shares
Previous Post: « There’s a First Time for Everything…Part 1
Next Post: Putting the Sexy Back in Running Gear! »