I just got back from an awesome weekend in Falmouth, though the Falmouth Road Race was not so awesome for me this year. I am going to go with the bad first: I had my very first DNF ever.

But you know what? I am very much okay with my decision. Let’s start at the very beginning of the race. I woke up Sunday morning to pouring rain. Not a very good sign! I took a quick look at the radar and realized that the rain was probably going to be around for a while. 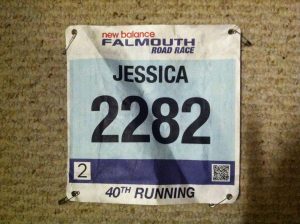 My friend Michaela came down to Falmouth to run the race too, and we had coffee and breakfast, caught some of the men’s Olympic marathon coverage, and then  hopped into the car so my mother could drop us off to catch a bus to the start.

Because they shut down the roads early, busing is really the only option to get to the start of the race. We arrived down in Woods Hole and it was still raining. Thank God for my H20 Audio waterproof iPhone armband and headphones—I could at least listen to tunes while I waited in my corral.

Eventually the rain stopped, but the start of the race was delayed due to street flooding in a few areas on the course. The Department of Public Works had to pump out the water, so that the course would be safe for runners.

The first heat took off 15 minutes later, and the second behind but at the same time (that’s where I was). I ran this watch Garmin-less on purpose because I wanted it to be a fun run and I really wanted to listen to my body instead of being a slave to my watch.

I was kind of surprised when I realized that my splits were around 8:05. I didn’t really feel like I was running that fast. The first two miles were okay, but then I started feeling how thick the air had gotten after it stopped raining. I was taking water at every stop and running through the hoses, but my face felt really flushed and so hot.

TO BE CONTINUED TOMORROW!