Home / Uncategorized / The Importance of Running with Identification

Last week, something really sad happened in Prospect Park in Brooklyn. A man who was identified as “John Doe” for 10 days was found unconscious by emergency responders who then transported him to the hospital, where he remained on life support. What is so tragic is that no one knew who this man was, his medical history, his emergency contacts, or anything because he did not have any form of ID.

He was later identified as 68-year-old Rynn Berry, by his half-brother after his picture had been circulated throughout social media in an attempt to identify him. Berry was removed from life support last Thursday, and unfortunately passed away. If we can learn one thing from this tragic story, it is that you NEED to run with some form of ID. There is no exception.

Had this poor man had some type of ID, his family may have been notified much sooner and his medical information could have been made available to the medical providers who cared for him. Running with identification is one of those things that runners seem to get complacent about after awhile. So I am begging you to please remember to run with ID once again. 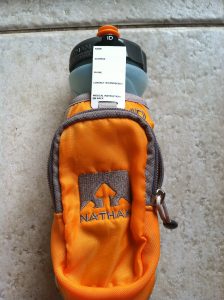 There are so many tools out there that can help make running with ID easier. I have a Road ID, which I love because it’s comfortable and has all the necessary information on it. If you carry a Nathan Performance hand held, it has a built in pocket with an informational tag for you to fill out. There are also items like the SPIbelt, that allow you to easily and comfortably carry your identification. Additionally, if possible, let someone you know where you are going to be running and approximately how long you will be gone.