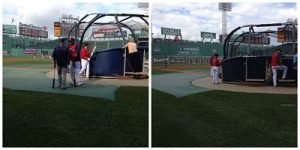 Last Tuesday we had a great opportunity to go watch the Red Sox take batting practice, get a tour, and stay for the game! We arrived at Fenway around 4:30 and then headed down to see the team practice and warm up.

This was by far my favorite part of the whole excursion! It was great to get to see Pedroia up close and Big Papi of course! After about a half hour, we headed up for a tour of the stadium—checking out the Red Sox Hall of Fame, club levels, etc. 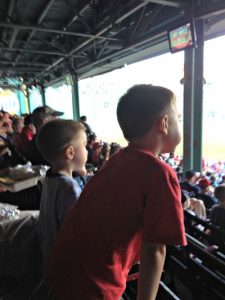 We stopped at the Green Monster, where we got to hang out for about a half hour. We grabbed a Green Monster IPA and enjoyed the view. Wow—what a view it was! I still can’t fathom that the Green Monster tickets are now around $185 a pop, and the demand is so high (even at that price!) that there is a lottery!

After finishing our beers, we headed down to the grandstand to our seats. The boys were very excited for the game to start, and they enjoyed watching the pre-game activities too.

We got some dinner and sat down to watch the game. My chicken burrito was surprisingly good for ball park fare. The boys chose the more traditional ball game meal of a hot dog and chicken fingers!

I was shocked that we actually made it through 5 innings before leaving (keep in mind we were there since 4:30). We left right after they Sox scored to make it 3-1. The boys loved their first Sox game, and it was so cool to see the cultivation of the newest members of Red Sox nation!

The game made an especially big impact on my five-year old. He could not stop talking about the game and the ball he was given during practice! They also got super cute insulated lunch totes and jerseys from the Red Sox. They are now official members of the Red Sox Kid Nation. 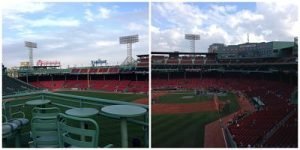 All in all, I would say their first Fenway experience was a huge success! They are excited to go back again!

I received 4 complimentary tickets to the Red Sox, along with the opportunity to watch batting practice on the field, and a private tour from Elevate Communications. I was not obligated to write anything about this experience, we just had a wonderful time! 😉