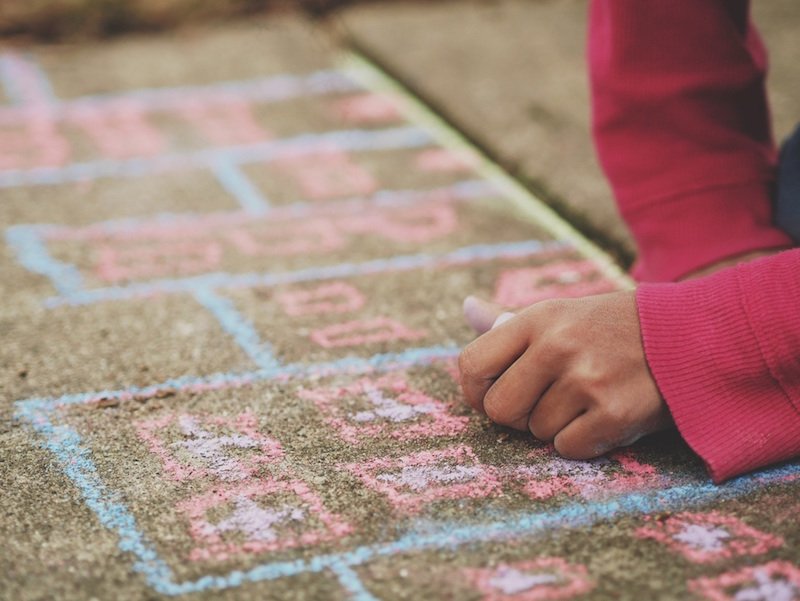 Now that the weather is improving, the boys have been spending more and more time outside. We have a play set and a ton of different sporting equipment, but I’m always looking for other fun activities for them to do outdoors. We have a nice outdoor driveway area near our garage that is a great spot for drawing with sidewalk chalk.

I could play hopscotch forever as a kid, and I still like to play! If you’re not familiar with how to draw a hopscotch grid, you can click HERE to see what it looks like. To play, the child tosses a rock into Square 1 (it has to land in the square, not on the lines that border the square) and then jumps over Square 1 and onward to Squares 2 and 3 hopping on one foot.

The player puts two feet down for Squares 4 and 5, and then hops on one foot again for Square 6, two feet on Squares 7 and 8 and then one on 9 and 10. At 10 change direction and repeat, jumping over Square 1 at the end. Player 1 then hands the rock to Player 2 for their turn. For the next round, throw the rock onto Square 2 and keep going down the line. Whoever successfully makes it to 10 first wins!

Four square is a fun, active game that’s really easy to set up. To get started, draw a 10 foot by 10 foot square and divide it evenly into 4 smaller squares. Number the squares in a clockwise fashion. Draw a diagonal line through Square 1 to mark the serving line.

When a player is eliminated, players move up a box and another player from the sidelines moves into the lowest square (4 in this case). The winner of Four Square is the player who can stay in Square 1 for the longest period of time (without being eliminated).

I love the idea of creating a giant connect the dots for the kids. Choose an easy to recognize item and outline it with a series of dots while the kids are occupied. Bring them back and let them connect the dots to discover the mystery object!

No, I’m not talking about creepy body outlines that you see on crime dramas! 😉 Kids love to trace themselves, so let them take turns tracing each other’s body outlines. When they are finished, they can add in their faces, draw clothes, etc. The can even get creative and make outlines doing different activities to create scenes. Have them color in the backgrounds too.

Draw a Network of Roads

When the boys were younger, they loved moving their cars and trucks along an intricate network of roads drawn out in sidewalk chalk. They still like to create roads, they’ve just gotten into much more intricate designs! It’s a great way to get kids of all ages involved in play– my two year-old loves to drive his cars and trucks with his big brothers!

What are your favorite sidewalk chalk activities?

0 shares
Previous Post: « Long Run Essentials ~ What Do You Bring?
Next Post: A Family Tour at Fenway Park and Some Great BBQ »