After being cooped up inside all day on Monday during Sandy, I was able to get out for a run yesterday during lunch. My husband was working from home yesterday, so I disappeared for 45 minutes and I am so glad I did (for my own sake and for the rest of my family!).

I don’t think anyone deals well with cabin fever, and I felt an insatiable need to exercise today. Of course I checked to make sure it was safe to do so before hitting the road. It’s always interesting to run after a storm. It’s a different way of surveying the damage. 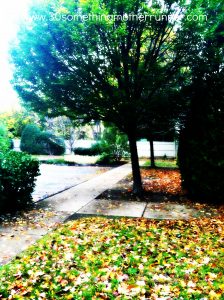 I ran through my neighborhood and into downtown Providence. I didn’t see much damage at all. I think only 2% of Providence residents lost power, compared to 95% in Westerly (Southern Rhode Island)!

The hurricane barrier that blocks the city from storm surge worked “flawlessly” according to the U.S. Army Corps of Engineers, so we did not have any surge damage in the city. I saw some downed branches and debris and one downed live wire being guarded by a police officer.

It felt so good to move and enjoy the break of sunshine that we experienced before the clouds and light precipitation moved in again. I was able to hear from my best friend again, so I know she is okay.

However, her condo building is still surrounded by 4 feet of water! They haven’t had electricity since last night, and it is unlikely to be restored for quite a while. Apparently there were a few downed wires that were submerged in the flooding.

I feel so badly for all of the people affected by Sandy’s wrath. I hope that the water recedes soon in New Jersey and people can begin rebuilding. Goodbye Sandy—we are all happy to see you go!