So, the big race was yesterday. We arrived in Virginia Beach on Friday night around 10:30 pm. I did feel a little old when I walked into the hotel lobby and saw a bunch of spring breakers ready to hit the town! I was not jealous though—I just wanted to lay down in a bed and relax. Twelve hours in the car is a LONG time. We didn’t hit much traffic in the Northeast, but the DC area traffic was a beast.

On Saturday, we hit the expo before lunch. It was not as big as I thought it would be, but number pick up flowed very smoothly. Yes, I had to pick up my number if I wanted to get my beer at the finish line!

We found some great little places to eat down here and walked EVERYWHERE. I honestly think we probably walked about 5 miles on Saturday. It was also nice to have some peace and quiet and to be able to shower uninterrupted—what a novelty! I could get used to this…. 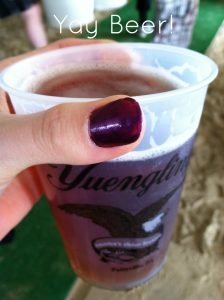 Temps at the start of the race were in the low 50s, so I had to make some last minute alterations to my spectating outfit. It hit me that, if I wasn’t running, it was going to be kind of chilly standing around. So glad I wore the layers—it was FREEZING waiting for the finishers to arrive. The marine layer didn’t burn off until about 11am, and then it finally warmed up.

Race organization for the Shamrock Marathon and Half was fantastic! Both races finish on the boardwalk, and the view was beautiful. The after party was right on the beach in a gigantic white tent. Yuengling as the title sponsor=free beer. I was surprised to find that they gave you not one, but FOUR free beers at the finish. Quite the party!

We relaxed for a while after the race and enjoyed the 2pm checkout before hitting the road again. I definitely want to come back to do this race next year!