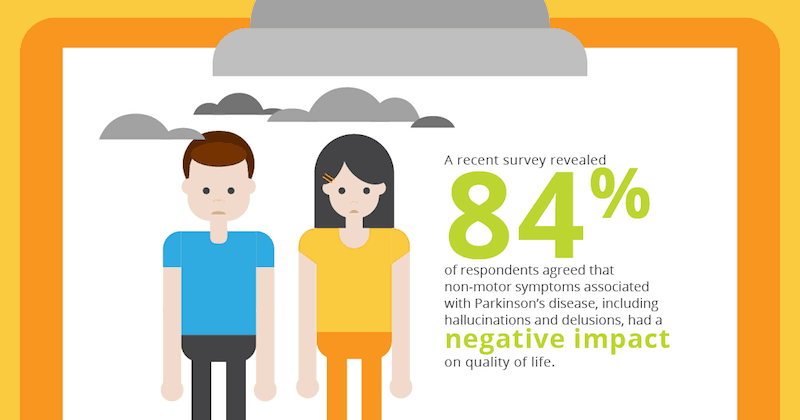 This is a sponsored post in partnership with The Motherhood. #MoreThanMotor #moretoparkinsons

My Grandma Alice suffered from Parkinson’s Disease until her death years ago, and it wasn’t until she was diagnosed that I started to research the disease and what it does to the body. While I knew about the movement aspects of Parkinson’s Disease (like resting tremors and loss of balance), I recently found out that there are a host of non-movement symptoms associated with the disease. I had no idea that people with Parkinson’s can also suffer from hallucinations and delusions. These symptoms can have a profound impact on the daily life of a person with Parkinson’s.

Recent survey results from the PMDAlliance revealed that 90% of respondents experienced non-motor symptoms of Parkinson’s. Of these respondents, 84% report that the symptoms negatively affect their life.

Hallucinations occur when a person see, hear, or experience things that aren’t real. People with Parkinson’s Disease have reported seeing groups of people and animals that are not physically there. Unfortunately, as hallucinations continue, it gets harder and harder for them to determine what is real and what is not.

People with Parkinson’s Disease can also suffer from delusions, which are false beliefs that are not supported by evidence. These delusions often reflect paranoid notions; a person with Parkinson’s may accuse a spouse of being unfaithful or of someone trying to steal from them.

Why It’s Important to Mention These Symptoms to Your Specialist

Often times, people with Parkinson’s don’t tell their care partner or medical specialists about their hallucinations or delusions because they are embarrassed or don’t even realize that they are a symptom of Parkinson’s Disease. There are a number of reasons why it’s important to talk with your specialist about non-motor symptoms. As the symptoms progress, it can become increasingly difficult for persons with Parkinson’s to determine whether or not what they are experiencing is real. Hallucinations and delusions can be really stressful for care partners as well, and if not addressed, can increase the chance that a person with Parkinson’s will be placed in a nursing home.

This error message is only visible to WordPress admins