I am super excited that my hubs is back for another guest post (this time it’s going to be a series!!).

Allow me to introduce myself: I’m a 30 something father– working dad, former athlete. Normally I wouldn’t have put the “former” in there, but that’s the current reality I’m trying to deal with. I guess that’s one of the big reasons for my guest appearance on this blog. My wife is extremely supportive of my effort to get back into shape, and writing here on a regular basis is one way to keep me accountable!

Sports were a daily part of my life from sometime in early grade school, through college, and into my late 20s; it was part of my identity. Soccer was my main sport, but I also played basketball, lacrosse, tennis, racquetball, softball (albeit beer league), at various levels throughout the years. Skiing is my biggest passion in life, and I spent a year doing it after college. I’ll never be able to live up to that – 65 days on the mountain!

Aside from competitive sports, I’ve always had active hobbies – kayaking, hiking, biking, lifting (you’d never guess that one by looking at me, but I was spotted in the local meat market, aka Bally’s fitness, on a regular basis for a while in my mid 20s). As the commercial says, “life comes at you fast.” I fell in love and married a talented and beautiful woman, got a real job, bought a place, and had my first kid at 26.

We added our second son 2 years later, and then (oops!) a 3rd son 7 months ago. Being a father is my favorite part of my life now. I still think of myself as a young dad, even though I just had a kid at 32. Sometimes my wife jokes that she has 4 boys – it’s not always far from the truth. Before having kids, I always knew that I’d be an active dad –playing soccer in the yard, hoops in the driveway until dark, coaching town teams, etc. 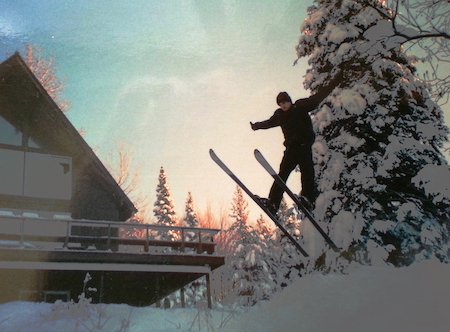 That’s all well and good, but it’s not like that from day one. Kids are babies first, so the only exercise I got with them in the early days was walking them to sleep for about 2 hours a night. Suddenly I had become something I never thought possible – a working dad who’s no longer in the shape I was in as a sophomore in high school. The first step towards recovery though, is realizing that you have a problem.

I still believed that I was an athlete. I went skiing, although 10 days on the slopes was more realistic. I played softball in a beer league, which was fun, but wasn’t doing much in terms of keeping me in the shape I wanted to be in. I took up mountain biking a few years ago, which I LOVE. It’s a great way to replace skiing in the off-season, or on Cape Cod, where I moved recently (not a ton of ski mountains out here on the Atlantic).

I never lost my thin frame, which everyone promised me would happen once I turned 30. I became the most popular feature on the local playground, where I’d start a game of tag with my son, and within minutes I’d have 10 kids chasing me all over the climbing structures… it’s all fun and games until you pull a muscle in your side while vaulting over a playground fence running away from a 1st grader.

That brings us to the present day– I can’t find the time to mountain bike as much as I want to (even less now with darkness falling at 4 pm). I haven’t found an indoor soccer league to join yet, I hate running almost as much as I hate early mornings, so don’t waste your time suggesting that. Oh, and as every single person who sees me out and about with 3 kids points out, I “have my hands full.”  The time for excuses is over now though. I need to get back to being an athlete.

It will most likely make me feel amazing mentally, and maybe I’ll finally go to bed earlier once I’m exercising regularly (except for the nights when I’m writing a blog post). I played racquetball with a friend last night, and if I can keep that routine up it will be a good start. So stay tuned, as I fulfill my promise to myself to find a way to get in shape, and maybe all the working parents out there can find some motivation to do the same!

You can find Clarke on the train to Boston, the bike trails on Cape Cod, or on Instagram!