Yesterday, my 6 year-old and I ran our first race together– the Main Street Mile. This was my first race as a child growing up in Falmouth, so it was nostalgic to get to run it with my oldest son! Although the course is a little different from when I first ran it, the family friendly nature of the event is still the same! We started at the Village Green in downtown Falmouth and ran down Main Street before making a right onto Walker Street. We followed Walker Street to Surf Drive and finished the race shortly after the turn.

You couldn’t have asked for a nicer day! Although I was hoping for a little bit cooler of a temp; the sun was shining, and it was a beautiful day to end a run on the beach! I had decided earlier to pace James during the race, since my first experience of crashing and burning is the only memory I have of the Main Street Mile! 😉 We picked up one of his first-grade friends for the race. At 1:00 p.m. and 75 degrees, it was pretty warm for the boys. We started out quickly and settled in to a better pace. After about a half mile, the boys took a quick little walk break. After encouragement they started running again and other than two other short walk breaks, we kept our momentum! 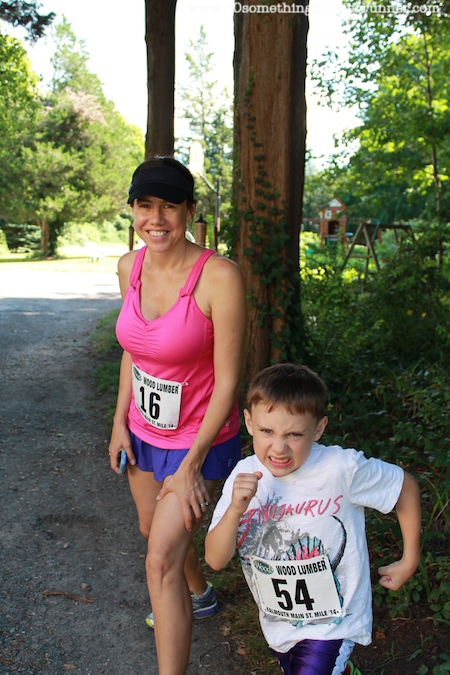 We crossed the finish line at 9:01. I was SO proud of both boys! Although it was warm and they were tired, they pushed through to the very end! It was a great experience to run with them and cheer for them along the way. A small part of me missed competing, but I wouldn’t trade the experience for anything! Nothing makes me happier than encouraging younger runners, especially when one is my son!

We finished the race with a walk on the beach– the boys went swimming! After a some beach time, we walked back up to the parking lot to head home (we live right up the street). I heard my name being announced and realized that I was 3rd in my age division! I got this funky little bobble head trophy (see pic). There were a grand total of 9 of us in my division. I guess not many thirty-something mother runners run 1 mile races on Sunday at 1 p.m.! Go figure! 😉

Did you race this weekend?