Last week, we took my five-year old into the pediatrician because he had a small rash on his back and was complaining of a headache. He had been hiking in the woods the week before and when we got home it looked like he had a few mosquito bites, but that was it. 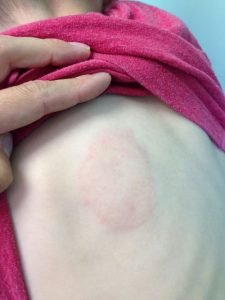 Fast forward to last Friday when we decided to take him into the doctor since the little spot had gotten larger and he mentioned the headache. The pediatrician didn’t even order blood work. She took one quick look at the area and said: “That’s Lyme Disease.”

At first, I didn’t know what to think. I had Lyme when I was younger, before they knew as much as they know about it now. We used to go to Cuttyhunk in the summer (a small island with a ton of deer!). The deer tick had gotten stuck in my belly button!

I was treated with antibiotics, and I haven’t suffered from any residual effects. The pediatrician said that as long as my oldest takes his 21-day course of amoxicillin, he will not have any lasting effects either.

Thanks God we caught it early! Within a day and a half, the rash was already cleared up! I wanted to share a few tips for preventing Lyme Disease, since it has been rampant on the Cape as of late:

Have you ever dealt with Lyme Disease in your family?