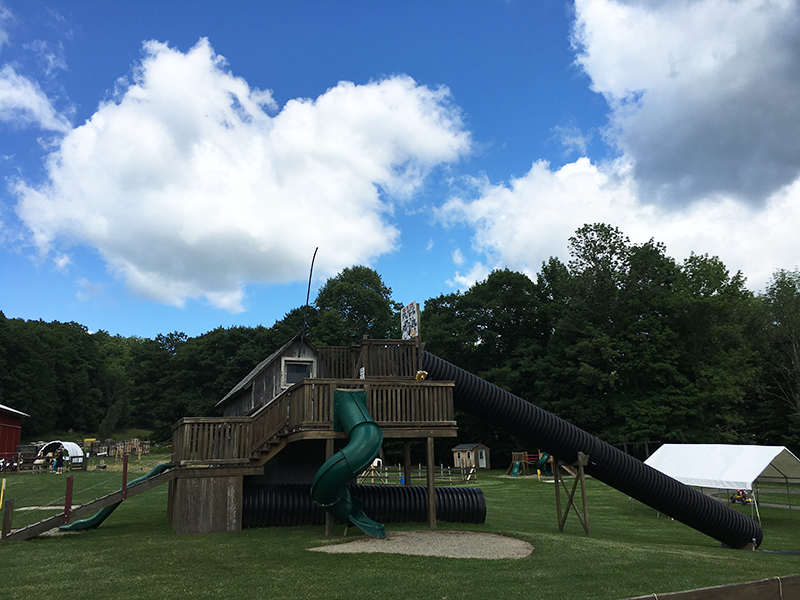 The boys were SO EXCITED when we told them we were going to see a farm on our trip to the Berkshires. We had no idea what to expect when we got to Ioka Valley Farm and assumed we would be there for an hour and a half or so. As it turns out, the boys could have stayed for the whole day!

When you arrive at the Ioka Valley Farm, you pay your admission to Uncle Don’s Barnyard. You can purchase feed for the animals who are inside and outside of the barn. Admission is as follows:

The farm is open Tuesday through Saturday from 10am – 5pm from the end of June to early September, rain or shine!

After entering Uncle Don’s Barnyard, we were immediately greeted by a newish litter of kittens that my oldest went back to over and over again! They were adorable! After mingling with the kittens we headed over to check out the other animals.

Feed bucket in hand, we visited the sheep, goats, pigs and cows. There are plenty of animals to feed and mini tractors to ride on before you head out into the farm yard. Don’t forget to do the hay maze either (but bring a cell phone for a flashlight!).

When you head out to the back yard, you will find see rabbits, goats and aplacas. Oh my God, the goats were hysterical! They have a contraption that allows you to put feed in a small bucket and use a pulley system to send it up to the goats on their climbing structure. Goats are smart; they come RUNNING when they see someone heading their way! The boys got the biggest kick out of them! 🙂

There are so many different areas to play (inside and outside!) at Ioka Valley Farm including:

The kids could have spent forever playing outside under bluebird skies! I love that the emphasis was on having fun outdoors and enjoying the beautiful landscape that is the Berkshires!

There is a small café that serves lunch (including farm produced food!) from 11:00 a.m. to 2:00 p.m. Tuesday through Saturday. The boys enjoyed the farm style tables and cow coloring sheets they worked on while waiting for lunch! Everything is reasonably priced and the cuisine is family friendly. I actually convinced my oldest to buy a peanut butter and marshmallow fluff (aka Fluffernutter) sandwich!

Maple Syrup and Other Maple Products

One thing you won’t want to forget on your way out of the farm is maple syrup and other delicious maple products. From maple BBQ sauce to maple mustard, there’s something for everyone on your list! During the maple sugaring season (mid-February through early April), visit the sugar house and see the process of maple syrup production!. There are weekend sugar house tours and tastings from mid-February thru early April!

The staff clearly took pride in the farm and sharing it with others. My husband loved learning all about he sugaring process and sampling the goods! 🙂

We had a TON of fun at Ioka Valley Farm, and I would definitely recommend it to families visiting the area! We are looking forward to going back again! 🙂

0 shares
Previous Post: « Visiting the Berkshires with the Family
Next Post: How to Glam Up Your Planner! »