Wow–what a whirlwind running weekend in Philadelphia! I had a blast hanging out with the Gore Running Wear team and pounding the pavement in the city of brotherly love (or as the marathon likes to call it: City of Brotherly Run and Sisterly Endurance!) at the GORE-TEX Philadelphia Half Marathon. My husband and my six-month old traveled down to Philly with me. We arrived in the city at about 3:00 and hopped on a cab to head to the hotel, check in, and then hit the expo for number pick up.

It was clear as we headed into Center City, that Philly was teeming with runners! We passed quite a few on the way to the Marriott Downtown. We dropped our bags after we met Jason from Saltmarsh Running at the front desk, and then made a quick trip to the Convention Center for the expo. I grabbed my number and long-sleeved shirt (which I love because it’s a women’s small!!). I actually wore the shirt with pride yesterday. 🙂

I stopped by a few booths, but amazingly I didn’t buy any more running gear! We went back to the hotel to change quickly for our 6:00 dinner reservation. Thankfully Gore had made a reservation, because I heard it’s nearly impossible to get a table on the night before the marathon!

As a team, we walked over to the restaurant Bliss. It was great to finally meet everyone in person, and I spent the walk over chatting with Karla from Run Karla Run (who coincidentally went to college with one of my field hockey teammates from high school!).

Bliss was fabulous, and we stuffed ourselves before walking back to the hotel around 9:30. I got back to the room and started laying out my race outfit and putting together a play list.

I had major wardrobe issues; I was originally going to wear my Gore Running Wear singlet, shorts, arm warmers, and compression socks. However, after obsessively checking the weather, I realized it was going to be 37 degrees for the whole run.

I hate being too warm, and I hate carrying around extra clothing. I also didn’t want to freeze my butt off. I ended up making a last minute change and going with my Lucy Activewear Endurance tights, compression socks, and my Gore Running Wear long sleeve. I was happy with my choice! I got up around 4:30 race morning and had my standard pre-race meal– everything bagel with cream cheese and two cups of coffee!

I will preface this race recap by saying it’s probably not the smartest thing I’ve ever done. The last long run I did was the ZOOMA Cape Cod half, and due to my toenail surgery, I had probably run about 6 times over the last 2 months. The longest run I did was 6 miles! That being said, I really wanted to do this race as part of Team Gore Running Wear, and I also wanted to run it for John, since Philadelphia was his hometown…

We left around 6:20 to walk to the start, which was a little over a mile away. I love that Clarke got up and took the baby with him to the start with me! It was odd walking over in the dark. I thought to myself how strange it must seem to some people that 30,000 people would get up in the dark, walk a mile, and then run 13.1 or 26.2 miles for fun! 😉

I was in the black corral, the second one to start, and I loved that it never felt too crowded or congested while running. Although it did get a little tighter around some turns, it never felt too crowded. The first half of the race was pretty flat, and I averaged 8:26 for the first 10k. I felt surprisingly okay, but I knew I had a ways to go. There were quite a few designated “Cheering Sections” and spectators in the downtown area. The energy was great. Things got tough around miles 8-11.

Although the race is marketed as fast and flat, I do not agree with the flat part! 😉 There are two pretty decent hills at miles 8 and 10, with some other rollers. Since I hadn’t done any long runs, I probably started to suffer in the later half, but I think it was made worse by the hills. My legs were really starting to feel it. I took my two GUs at miles 5 and 10 and had some Gatorade at the water stops. I am fairly confident that it was mainly a lack of endurance and leg strength issue.

I took a few walk breaks from about miles 9-12, but just kept plugging along. I had written a message about John on my hand to look at when I felt like quitting. He never ever gave up his fight, and he was a constant source of inspiration on this run. I was so excited to finally see the spot where the marathoners split from the half marathoners. Crowd support picked up a lot, and it was so great to hear people yell your name (love having my name on a bib!). The spectators were AWESOME. Thanks so much guys–it helped me a ton! 🙂 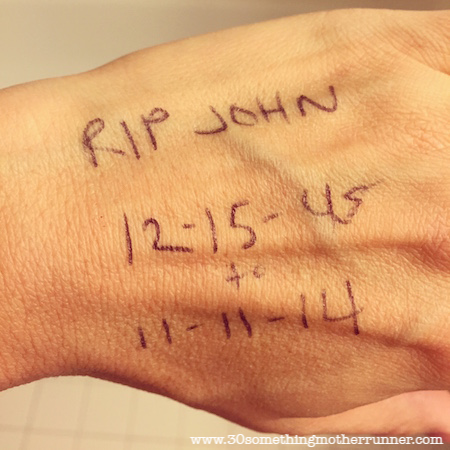 After splitting off and seeing the finish line in sight, I managed to pick up the pace a bit. I finished in 1:56:28 (8:53 average pace). Since I went through the first 10k at 8:26 average, it gives you a sense of how hard the second half was for me! I really just wanted to be able to finish the race, so I am so happy that it was a sub 2.

After grabbing a snack, we headed to the GORE-TEX VIP tent where we got hot coffee and hot chocolate. They had massages in a heated tent for us– it was a godsend! I can’t wait to go back and run Philly again after a good training cycle! I am also thrilled that I had no foot or toe pain– orthotics for the win! Thanks so much GORE-TEX for an AMAZING weekend of fun, running, and the super fabulous gear (which I wear all the time). We had the best treatment, and I hope to work with them again soon! 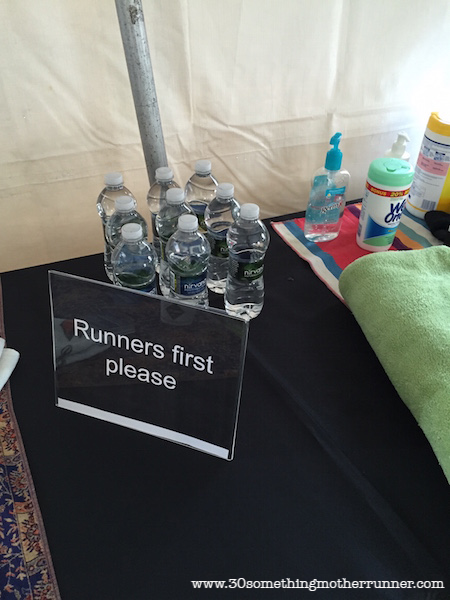