Sharon is a fellow Rhody Blogger and a kick butt mother runner, who started running at age 56! Go Sharon! 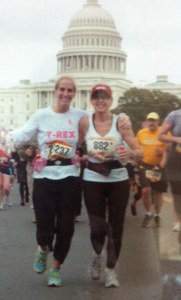 1) What is your favorite race?

Although each race, no matter the distance, has its own great rewards and memories, I have to say that my favorite race is 2012 Marine Corps Marathon, October 28, 2012. It’s a race that I never, ever imagined running when I began running at age 56, almost 5 years ago; and yet last October, I found myself at the start AND finish of this memorable marathon, referred to as The People’s Marathon because it is open to all runners ages 14+.

2) Where was the race located, distance, and any other details you want to share.

The race starts in Arlington, VA and winds through Washington, DC as runners catch sight of the National Monuments, run along the the National Mall, pass the U.S. Capital Building, Arlington National Cemetery, Georgetown and back to Virginia at the sight of the Marine Corps War Memorial. The race is 26.2 miles.

3) What made the race special for you?

Marine Corps Marathon was special to me because I had run one marathon previously (Cox Providence) and felt that at my age, I was “one and done.”  My daughter-in-law Nicole talked me into running Marine Corps with her and our son Keith and 4 running friends as my entry into my 60’s (my 60th birthday was October 6, 2012). My husband Barry would join us, but not as a runner.

During training, one of our running “teammates”, Tracey, was diagnosed with breast cancer.  If there ever was a reason to run, it was to honor Tracey and her courageous battle.  Tracey made the trip to Washington, DC with our group, and she and my husband Barry found us at various miles along the route.  Tracey was and still is a great inspiration and after months of treatment, is in remission and running again.

I trained for Marine Corps with the Runners World Challenge and found it amazingly well organized, easy to follow, challenging but not crazy difficult and always had an online presence for any questions about anything running.

I also ran to honor a dear college friend of my daughter Audrey and her husband, Matthew, Dimi, who was their Best Man at their wedding. Dimi left his high-powered corporate NYC job after 911 and joined the Marines at age 28.  Dimi was killed during a battle in Fallujah in November 2004 and is buried at Arlington National Cemetery.

Running past the cemetery at dawn and seeing those thousands of grave markers was my small tribute to a very great man and all the great service men and women who gave their lives for our great freedoms.  I shed many tears while running and contemplating their sacrifices.

All along the entire marathon route, Marines were the most awe-inspiring presence, handing out water, cheering us on, shaking hands, shouting encouraging words, carrying American flags, smiling, honoring us runners as we honored them.  Remarkable and unforgettable.

The race was also special to me because Nicole and I ran step-by-step together, talking and laughing and encouraging each other every inch of our 26.2-mile journey.  Nicole is by far the better runner, but she was my inspiration every step of the way.

We would later find out that the day of the race was National Mothers-in-Law Day! How cool is that? The race was also special because it literally preceded Hurricane Irene by a mere hour or so… and as soon as Nicole and I finished, got our medals and warmers, we ran to our hotel, hopped into waiting cars and drove up the coast in torrential rains to home in Rhode Island.

Marine Corps Marathon is a race I will never forget; and although I say I’m now “2 and through”, I may have another marathon in me!  We’ll see.

4) Best piece of running advice you can share with other mother runners?

My best piece of advice is to put on a pair of running shoes and get out there.  I began with a run around my block in a pair of borrowed running shoes at age 56.  I just kept inching further and further, following a very specific training plan (Hal Higdon 5k) until I actually felt ready for a race. I haven’t stopped since and am currently training for September Providence Rock ‘n Roll Half.

Oh, and as you progress, get a really good-fitting, perfect for you pair of running shoes and non-blister socks.  These two things are everything to me!

You can find Sharon blogging at www.MomGenerations.com (which she co-owns and founded with her daughters Audrey McClelland and Jane Govednik).

0 shares
Previous Post: « Tempo Runs and Tofu (and a great local giveaway!)
Next Post: A Few Things You Didn’t Know About BJ’s (and their Back to School Offerings!) »