I got the chance to meet (in person) Michelle San Antonio, a super badass mother runner, at last year’s ZOOMA Half Marathon in Falmouth. Michelle is an inspiration as a forty-something mother runner who blogs at For the Love of Running. She has qualified and run Boston, and she frequently wins age group awards. Read on to learn more about her: 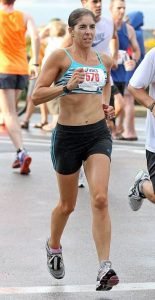 1) What is your favorite race?

Before this year, my answer would have been different. I thought that I was going to run the Boston Marathon once and be happy with that, but ever since I stood at that starting line in Hopkinton this past April, I knew I was going to want to go back again and again and again. Everyone tells you that Boston is different, but you can’t know just how different until you’re actually there.

Obviously it’s taken on so much more significance now, and I cannot wait to be back there this April, to be a part of what is undoubtedly going to be an extremely emotional and incredibly empowering, experience.

2) Where was the race located, distance, and any other details you want to share.

Most people probably know the details, but the marathon runs 26.2 miles from Hopkinton to Boston, and the entire course – really and truly, the ENTIRE course – is lined with spectators cheering for you. I’ve heard it described as a 26.2-mile standing ovation, and that’s exactly what it is. I don’t think I stopped smiling the entire time.

3) What made the race special for you?

There isn’t anything that isn’t special about Boston. From the second you step out into the Athlete’s Village on race morning, to the moment you cross the finish line in Copley Square, you’re overcome with emotions that you’ve never experienced during a race.

The excitement and energy of the crowds, and of the runners, is unbelievable – you feel like a rock star, whether you’re at the front of the pack or the back of the pack – the level of cheering and encouragement is just the same.

And you know – you feel in your heart – that you’re a part of something much, much bigger than yourself. You’re part of an enormous group of people who have poured their hearts and souls into getting ready to run on the stage that is the Boston marathon; people who worked hard and overcame obstacles and never gave up, and you’re all taking one huge victory lap together. Friends who had run Boston before told me that “it becomes part of you,” and that’s really the best way I can think to describe it.

You  can find Michelle San Antonio on Facebook at facebook.com/ForTheLoveOfRunningRI or on her blog at For the Love of Running.

If you would like to be featured on Favorite Race Friday, send me an email at 30somethingmotherrunner[at]gmail[dot]com.