This past week I broke down and bought another e-reader. I was really bummed when my Kindle fried after two years and there was nothing they could do for me but offer me another one of the same model for $65. I passed because I would rather spend a little more and get a newer generation e-reader. 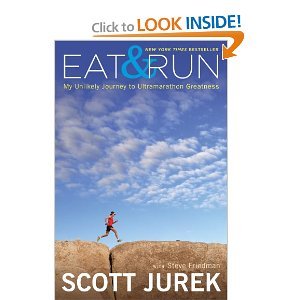 This time I went for the color Nook from Barnes and Noble. So far, I am VERY happy with it. The first book I read (I borrowed it from a friend via the LendMe feature!) was Eat & Run by Scott Jurek. I had been dying to read this book as soon as I heard of its imminent release. While not an ultrarunner myself, I am so curious about the allure of the distance and the people who sign up to run ultramarathons!

Eat & Run was a quick read—very engaging. I enjoyed that Scott gave a lot of detail about his personal life—a side that many of us have never seen. He recounts a number of key races in his career and how they have shaped the highs and lows of his running career. He has a very healthy perspective on running and how it fits into life.

I also really like the fact that Jurek includes a tasty vegan recipe at the end of each chapter. I knew that Scott was a vegan, but I didn’t realize that he is a pretty accomplished cook. The book covers a lot of his evolution from meat eater to vegan and the reasons for his transition.

I walked away from the book with a healthy dose of respect for those who run ultras. I am not one of those people who simply label ultra runners as “crazy.” I can understand the lure of pushing your body to the limit and further. While I don’t think I will be running an ultra any time soon, I definitely wouldn’t count one out!

Have you read Eat & Run? If so, what are your impressions of the book?