Before leaving town last Friday morning, I headed out for my first dawn patrol run ever! I have run at night many times, but never in the dark hours of the early morning.

Wow—what a different experience. The first thing I noticed is that I was actually running a little slower than usual. I can attribute that to a few factors: I had run a quick 7 miles the night before, it was 5:45 in the morning, it was dark save for my headlamp, and it was a little slick. 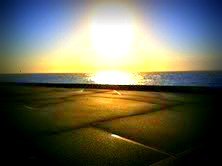 I was a little worried about the wind factor, since the wind was still gusting around 18 mph. It turns out that it didn’t really bother me that much. I was bundled up, but it was a little scary hearing it howling through the woods.

I was also a little worried about the wildlife. The coyote factor is not nearly as bad as it was a few years ago, but I still get nervous running alone in the dark. Last summer, my sister came across one in the early morning light on the local bike path (a large one!).

One would make me a little nervous, two I would definitely be scared. There have been reports of them attacking large dogs in the past on the Cape. Luckily for me, there were no close encounters of the wildlife kind!

Running in the early morning hours is very peaceful though. There are very few people (if any) out there and it is virtually silent. I also got to see a BEAUTIFUL moon set and a gorgeous sunrise. It’s not something I take the time to appreciate as much as I should!