I am SO excited that this is the first post from my Super Dad husband, Clarke. He is going to contribute occasionally to 30 Something Mother Runner to share a dad’s perspective of parenting three crazy (and very lovable) boys!

Last weekend I called upon my inner Clark W. Griswold, on a family trip to New York City.  I’d like to think that we outdid Chevy Chase and gang– by a long shot.  Driving to New Haven and taking Metro North into Grand Central is a breeze… ok, maybe all the passengers on our train car wouldn’t agree, but we made it down in one piece.

Early in the week I was psyching my 4 and 6 year olds up for the trip; my oldest son had been to NYC when he was 6 months, so essentially they’d be experiencing it for the first time. I described the huge buildings, the enormous Central Park, the plethora of playgrounds and museums, the Intrepid war ship. Apparently I sold it well, because my son said “New York is my second-favorite city, after Providence.” A kid after my own heart. I told him he might want to hold off on that designation until he actually saw the place!

We kicked off our tourist activities on Thursday evening with a small snack of grilled cheese and bacon with a side of waffle fries at a 24 hour diner. “You mean it’s open all day and all night?!” “Yep, this is the city that never sleeps.” “Awwwwesome!” My wife was at a conference, so I strapped my 2 month old on, and the 4 of us walked from the Penn Station area down to the beginning of the Highline Park in the Meatpacking District. If you’ve never been, and you appreciate urban public spaces, this is a must-see.

The Highline is a fantastic reuse of an abandoned elevated freight line, converted to a linear park taking you from 30th St. to Gansevoort St. along the West Side. There are views of the Hudson River and the sunset, and many other attractions. The landscaping and hardscaping are beautiful, the latter often referencing the previous use of the freight line . My kids got a kick out of the rails embedded in some of the walkways and the iron sculptures reminiscent of rail ties.  Numerous bars are scattered along the way, ranging from happy hour places, to taco stands, to shaved-ice bars.  We walked the entire park and back, no small feat for our group! At one point, I had the baby in the Ergo carrier in front and the 4-year-old on my back while I pushed the 6-year-old in the stroller!

By the time we had dinner at the New York Burger Co. and made it back to the hotel, it was pretty late.  By the time the kids actually stopped talking and fell asleep on each other in their double bed, it was even later.  We definitely embodied the city that never sleeps motto!

Friday was our big day– Jessica took the littlest man to her conference, which left me and the older boys to do our thing.  Tons of stuff to see, not enough time to see it… so what do we do first?… struggle to get out of bed, get coffee and pastries in the lobby, take forever to get dressed and ready to go, and finally leave the hotel by 10:30.

We jumped on the C train up to the American Museum of Natural History to see some dinosaurs.  My 6-year-old pointed me to the correct platform to head uptown, and both boys enjoyed their first subway experience.  The museum was crowded with kids camp groups and… tourists (freakin’ tourists), but eventually we were on our way through the expansive building.

I decided at the start that regular tickets were enough– no need to spring for the special exhibits. Of course the kids got a glimpse of the signs for the special exhibits – live spiders, and sharks – and continuously asked when we could go see them.  I decided that rather than spend another $30 and wait in the long line again to get tickets, I’d barter with them for an alternative.  Thirty dollars and two happy kids later, we left the gift shop to go find some lunch…

We found a nearby deli and brought steak and cheese subs (sorry New Yorkers, should I say heros?), then walked over to Central Park for a picnic.  The kids found a somewhat private spot on a secluded rock outcropping, and we had a nice lunch.  Shortly thereafter, my 4-year-old informed me he needed to do a number two… AWESOME.  Luckily I kept the museum tickets, so we zipped back over to the museum for our best bet at a clean public restroom.  Tip to future NYC-traveling parents: the entrance fee to a museum is worth the price of admission when your little kid has to take a deuce and you’re nowhere near the hotel! 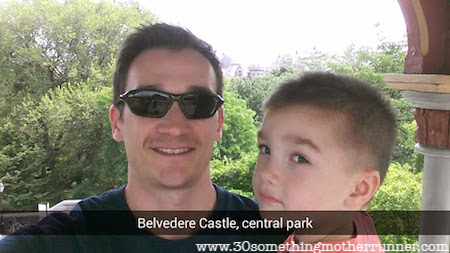 After eating, we set off to find the castle – Belvedere Castle to be exact.  No princes or princesses, but the narrow staircase climb to the terrace and the upper level offered a beautiful view across Central Park.  We spent a while hanging out in the shade, having a snack, and enjoying some down time after the trek through the park.  I told my boys that my favorite part of the day was getting to hang out with them and not have anywhere else to be. We had no agenda, no appointments, just the whole day to enjoy our time together. Later they told my wife that their favorite part of the day was going to the gift shop in the museum…  “oh yeah, and we liked seeing the dinosaurs and the animals, and Central Park, and the castle.”

By the time we finished our Thai take-out in the hotel room, it was almost 10 pm.  As I lamented the fact that it was so late, my 6-year-old reminded me that NYC is the city that never sleeps.  True enough kid, and your dad is the father who never sleeps, so go to bed!  In all honesty though, I can’t wait to take them back to New York!