So I am one week away from the third trimester. I took a deep breath when I looked at the calendar and realized I have only three months (or less) until Baby Morrison #3 joins us! My legs definitely get more tired walking about the stairs, but all things considered, I’m feeling great! 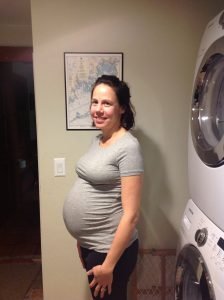 I get to take the super tasty gestational diabetes test next week, and hopefully I pass! 😉 I did with the other two, but I have recently spoken with 2 moms that had to take the 3 hour test with their third. Cross your fingers for me! I also have a midwife appoint next week. I think after that one, I go every two weeks. It still seems a little surreal. I have gotten used to the family routine with an almost four year-old and almost six year-old, and pretty soon we will be back in newborn territory…

Since we have only three months left (that I think will go very fast!), we are moving into high gear with the transformation of the guest room into a nursery/guest room. I am brining in some outside help with this one to get it done sooner. It’s going to be yellow and grey, which I think will make a great gender neutral nursery. I love yellow and grey together!

With the other home improvements, a lot of little things are being checked off the to-do list. The roman shades I had made for the boys’ room and the den will be arriving today, and the boys’ bathroom door (we are de-leading and repainting an old door from the home) should be finished by the end of next week. It’s all starting to come together–such a great feeling!